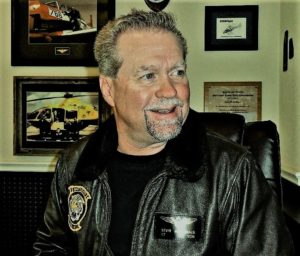 KEVIN McDONALD was born in Fort Worth, Texas, and grew up near Carswell Air Force Base during the height of the Cold War—a time when Strategic Air Command B-52s routinely launched and returned carrying nuclear weapons meant to ensure America’s survival. After earning a Journalism degree from the University of Texas at Austin, he was commissioned into the United States Navy in 1982. Two years later, he graduated at the top of his flight-school class and spent the next eight years flying as a naval aviator.

In 1992, during the drawdown that followed the First Gulf War, he left the Navy and became a public-safety  helicopter pilot for Travis County STAR Flight in Austin, Texas. By the time his career ended in 2012, he had flown more missions, logged more hours, and completed more rescues than any pilot in the history of the program.

His first book, Life Inside the Dead Man’s Curve, is a white-knuckle narrative about his thirty-five-year career in the cockpit and became a #1 bestseller in Amazon’s aviation biographies category. His latest book, A Nation Interrupted, is a thrilling fictional ride through a divergent 20th century and was a 2020 Dragon Award finalist for Best Alternate History Novel.

Now retired from flying, he lives with his wife in Austin, where he continues to write about his two greatest passions–aviation and history.